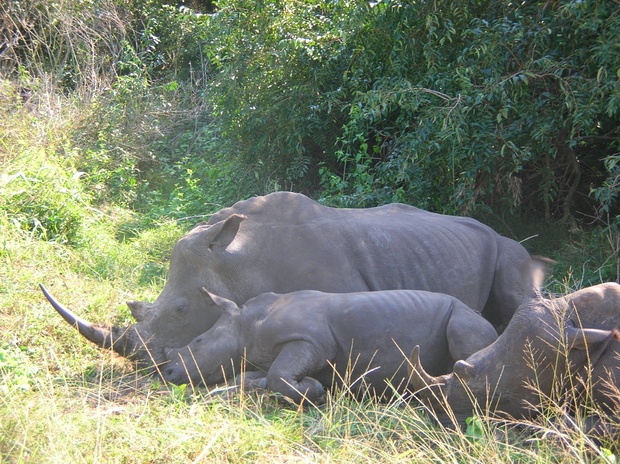 As a pro-active step to deter poachers from targeting rhino in the World Heritage Site, the iSimangaliso Wetland Park Authority and Ezemvelo KZN Wildlife (EKZNW) recently implemented a rhino de-horning programme throughout the Western Shores section of the Park. This is reflective of the Park’s commitment to put rhinos and their safety first,

According to Park CEO Andrew Zaloumis , “The iSimangaliso Wetland Park, like other conservation areas in northern KwaZulu Natal and Kruger National Park, has experienced an unprecedented surge in rhino poaching effort during the last 24 months - often with simultaneous multiple poaching incursions. In a considered response, and after in-depth discussion, reflection and specialist consultation, the iSimangaliso Authority together with our conservation partners EKZNW, is putting into place an additional suite of bold strategies and interventions to bolster rhino security in sections of the Park where they are most under threat and vulnerable to rhino poachers.”

Under special TOPS (Threatened or Protected Species) permits from the Department of Environmental Affairs, the de-horning of black and white rhino in the Western Shores section of iSimangaliso has been completed this week. This 30,000ha section of the 220km long Park includes incorporated private forestry lands owned by Siyaqhubeka (Mondi).

The operation to de-horn the animals was conducted by EKZNW vet Dr Dave Cooper in collaboration with Dr Mike Kock and his team from the University of Pretoria – Faculty of Veterinary Science (Onderstepoort). The horn material has been removed thereby rendering the rhino “valueless” to poachers. Dr Mike Knight, the Chairman of the IUCN African Rhino Specialist Group, as well as SADC Rhino Management Group, agrees that the method “remains a management option in high risk smaller populations.”

The procedure, which can be likened to cutting a toenail without damaging the “quick”, takes approximately 20 minutes and is completely painless. Research has shown that provided the entire population is targeted there are no social side effects which may affect the rhino in the short or long-term.

Says Tony Conway, EKZNW iSimangaliso Park Conservation Manager and Chairman of the KZN Rhino Management Group, “With the de-horning work complete, and the Western Shores “horn-free”, the rhino are now less vulnerable to poaching, able to roam freely and breed without being targeted for their horn.”

De-horning was used extensively in Namibia and Zimbabwe during the 1990s and more recently in small populations in South Africa, especially in the private sector and also in other SADC countries and East Africa. Namibia has again commenced with an extensive de-horning operation. Coupled with significant increases in funding and anti-poaching effort for rhino protection, de-horning is believed to have contributed significantly to reducing losses to poaching in many parts of Africa. It was for this reason, in light of the increased threat to rhino in KZN (over 250 rhino killed by poachers in the last two and a half years in KwaZulu-Natal), that iSimangaliso has actioned this initiative.

Educational information is being made available to visitors and local tour and accommodation operators, as well as ongoing workshops with neighbouring communities. Zaloumis says that “The support of conservation-minded local communities has led to significant victories in the struggle against rhino poaching around the Park. iSimangaliso and EKZNW will continue to consider all developing strategies that work towards the stopping of this onslaught against defenceless animals and South Africa’s natural heritage. Removing the Western Shores rhinos’ horns has now given them a better chance of survival.”

Contemporary studies contend that the Earth has lost over half of its wildlife over the past 40 years. When iSimangaliso was listed as SA’s first World Heritage Site, 180 countries concurred that the iSimangaliso Wetland Park is a place of global significance. Over 6500 plant and animal species are known to occur in the iSimangaliso Wetland Park World Heritage site including: 526 bird species (25% of Africa’s bird population); 467 species which are listed as threatened in South Africa including rhino and turtles; and 11 endemic species (that is, the Park is the only place in the world in which these species occur).